Living in an older home has its ups and downs.

On the plus side, you’re living in a home with history – each corner has a story to tell. Not to mention, Federation-architecture just looks fantastic – enough said!

On the other hand, older homes come with their fair share of issues – simply put, because of their age, they completely lack a lot of the features we now take for granted.

Features such as ducted heating and cooling systems in Melbourne!

While there are many upsides to living in an older home, air conditioning isn’t always one of them.

Good news: our heating and cooling company in Melbourne can perform ducted air conditioning installation to all sorts of properties, including old homes. Find out what’s involved…

As a company that specialises in ducted heating and cooling in Melbourne, we’ll readily admit that we’re a little biased. Take our word for it however, it comes from hands-on experience!

It doesn’t matter how old your home is – your comfort is paramount. That includes the climate.

Many older homes don’t have air conditioning. And the ones that do? They’re often fitted with old, noisy window rattlers. Not only do these take far too long to cool a space down, but they’re also expensive to run and super noisy!

Worst of all, they only work in single rooms – if you want to cool your whole home, you’ll need multiple systems. Just imagine the symphony of buzzing while you try falling asleep… comfy loses all meaning here!

And it isn’t just new homes, either – with the right planning, all of these fantastic features can be brought into older homes too.

Key word: planning. It isn’t always easy – oftentimes, we might have to overcome a whole bunch of challenges to help maintain your comfort…

When it comes to ducted heating and cooling systems for Melbourne’s oldest homes, space is usually the first barrier!

Simply put, 19th century architects had no way of knowing that ducted air conditioning would ever be invented.

So you can’t really blame them for designing and building homes that aren’t compatible with ducted air conditioning installation!

Long story short, there’s a lot going on here that needs to be accounted for when adding ducted air conditioning to an older home.

While most older homes weren’t designed for ducted heating and cooling installation, that doesn’t mean that it can’t be done. The only way to be sure is to take a look at your home and what your ceiling situation looks like.

Thankfully, we stock a massive range of systems, giving us unparalleled flexibility when it comes to ducted heating and cooling in Melbourne. 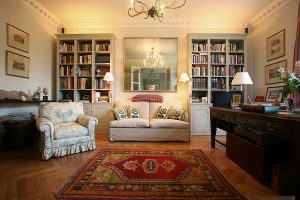 Draughty. Rickety. Poorly insulated. We aren’t saying that your older home suffers from these issues – however, many do, especially if they haven’t been well-maintained over the years.

These types of issues are prevalent in many of Melbourne’s older homes (in fact, they might be why you’re renovating in the first place!)

Loose window fittings. Doors with gaps that leak air in. Insulation that simply isn’t up to the job. Issues such as these (and many more) can lead to your home’s temperature fluctuating a lot more than in a modern house.

And that necessitates more powerful ducted heating and cooling to compensate.

Of course, power isn’t the only thing that goes into choosing a system – with more power, comes higher energy usage.

At Alpha Air, energy-efficiency is one of our top priorities!

Let’s say you live in a seriously old home. As in, the type of house that would have been brand-new when your great-great-grandparents were first entering the housing market.

While Melbourne isn’t that old of a city by global standards, we’ve got our fair share of older homes.

Take a trip down to the inner suburbs, and you won’t be able to go more than a few metres without seeing another house that predates Federation.

Many councils in Melbourne are extremely protective of their older homes and have put in place heritage overlays to make sure that the unique feel of their neighbourhoods is maintained.

If you live in one of these areas and want to renovate, you’ll need to apply for a planning permit for a number of changes, including upgrading your heating and cooling system.

Let’s get something out of the way: no, this doesn’t mean that you’re banned from upgrading your home’s air conditioning. That having been said, it does change things.

Specifically, it means that any upgrades you make to your home must either:

Basically, as long as it looks like nothing’s changed, anything goes.

Luckily for you, ducted air conditioning is an internal improvement, so it ticks the second box!

Secondly, our heating and cooling company in Melbourne deliberately installs outdoor and roof-mounted condensers in spots where they won’t be seen from the street, ensuring that your application for a planning permit is accepted.

In some cases, we can even add zoning to an existing system, giving you total control over the climate throughout your home (something the original designer would never have known possible!)

Ducted heating and cooling is one of the most popular choices, whether it’s an old home or a new one.

However, it isn’t the only option!

Ducted heating and cooling in Melbourne’s oldest homes can be a bit difficult to pull off. Good thing that isn’t all our team does!

Multi split air conditioning offers similar coverage and flexibility to ducted heating and cooling, but with one major difference: it’s a lot easier to install.

All that stuff we mentioned before about ceiling space isn’t an issue.

Call Alpha Air for heating and cooling in Melbourne

Your home is old, and has its own quirks – these need to be accounted for when carrying out ducted air conditioning installation.

The thing that sets our heating and cooling company in Melbourne apart from the others?

Our thoroughness – while it’s obviously important that we get the installation right, we find that the planning and strategising can make or break the entire job.

Especially if you live in an old home!

It doesn’t matter whether you’re about to embark on a new construction project or want to add air conditioning to existing ducted heating – we’re here to look after your comfort.

Get a free quote