If someone stopped you on the street and asked you about the difference between refrigerated and evaporative air conditioning, would you be able to give an answer?

No? Don’t worry, you aren’t alone!

Ducted air conditioning… evaporative… multi-split… for most people, it’s something that keeps them cool, and that’s about it. It could run off unicorn tears, as long as it keeps you comfortable.

If you’re building a new house or renovating an older one however (and have ducted air conditioning installation on your to-do list) the difference between these different types of systems goes from “huh, that’s kinda neat” to absolutely crucial!

Two in particular that cause a lot of confusion? Evaporative cooling and ducted refrigerated air conditioning in Melbourne.

Are you considering ducted heating and cooling in Melbourne? If so, you’ll need to know the difference!

Introducing the contenders: refrigerated vs. evaporative for ducted air conditioning in Melbourne

Okay, before we get started, we need to lay out some important information.

Namely, the fact that “ducted” simply refers to the system used to deliver cool air around your home. As long as it uses ducts built into your ceiling to deliver air from a central unit, it’s a ducted air conditioning system.

By contrast, “refrigerated” and “evaporative” refer to the actual principles used to create cool air!

While a lot of people use the term ”ducted air conditioning” to refer to refrigerative cooling, it applies to all types of systems that use this delivery method – that’s why you’ll still find a lot of ducted evaporative systems in Melbourne’s older suburbs.

Now, for the make-or-break question: what’s the difference?

And more importantly, which one’s the best choice for ducted air conditioning in Melbourne?

Unfortunately, there isn’t a clear-cut answer – it all depends on what you need.

While we can’t say for certain which one’s the better choice for you (without performing an on-site assessment of your home, that is), we can point out some of the important differences between the two, as well as when one might be more appropriate than the other.

We mentioned above that the operating principle is the biggest difference between the two – so what better place to start than with this?

Both of these types of systems rely on the heat transfer principle. Instead of trying to “create” cool air, they simply absorb the heat out of warm air, before pumping the now cooled air back into your home.

As they say, the devil is in the details.

It’s a minor difference, but it has a huge impact on your comfort!

Doors and windows: how the two stack up

Here’s a difference you may not have seen coming: did you know that evaporative cooling requires you to leave the doors and windows open?

That’s because the air that comes out of an evaporative system is both cool and moist.

By leaving the doors and windows shut, you could end up with humidity building up in your home. Not only is this uncomfortable in its own way, but it also reduces the effectiveness of your cooling – moist air takes longer to cool off than dry air.

By leaving a door or windows open, you allow humidity to escape.

By contrast, refrigerated air conditioning is the other way around – in order to be effective, you need to keep your doors and windows shut!

Think of it like a refrigerator, where leaving the door open allows cool air to escape.

Refrigerated air conditioning works by essentially creating a “feedback loop” – it cools the same air over and over, rapidly bringing the temperature down. 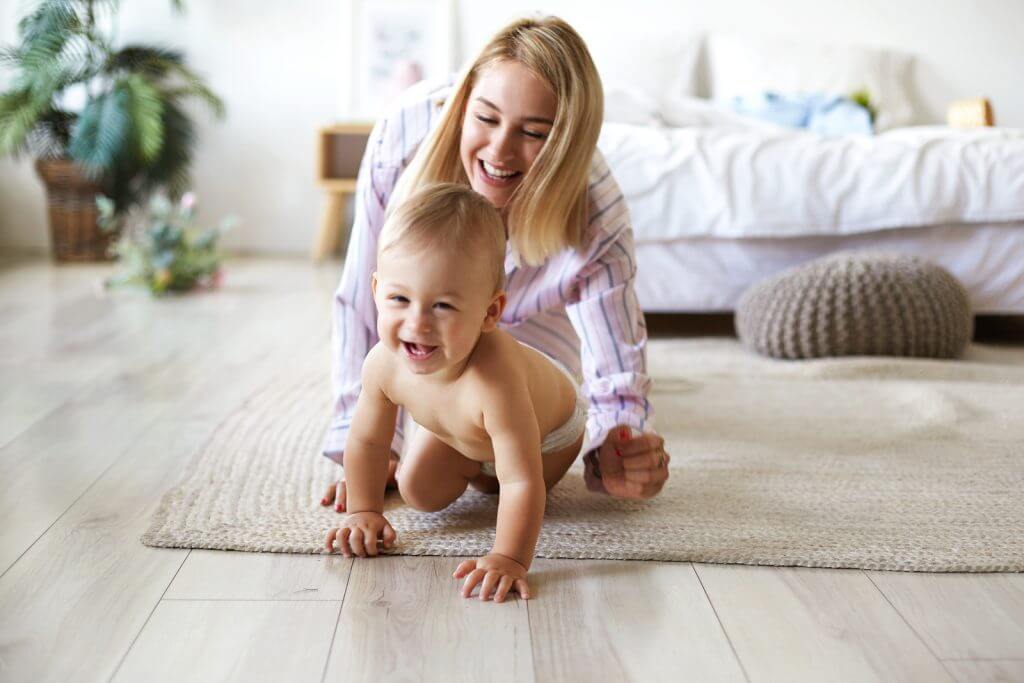 Many people prefer evaporative cooling thanks to its “more natural” cooling process.

Unfortunately, that comes with a trade-off: namely, evaporative cooling is less powerful than refrigerated.

Compared to the specialised refrigerants found in refrigerated air conditioning, water is less effective at removing heat from the air.

Not only that, but ducted heating is less effective the higher the humidity is. If you live in a coastal area of Melbourne such as Bayside or Kingston, you may want to give evaporative cooling a miss.

Melbourne’s summers are mild enough that this isn’t a major problem – if you’re dead-set on getting the most powerful option on the market for your ducted air conditioning installation however, it’s something you may want to think about.

What about refrigerated air conditioning?

When it comes to power, refrigerated wins, hands-down.

Not only is refrigerated air conditioning unaffected by humidity, but it also works much faster than evaporative cooling, even in ideal circumstances.

That’s because refrigerated air conditioning uses a range of specialised refrigerants that are designed to absorb as much heat as possible, making them much more effective than just plain water.

It doesn’t end there, however.

Essentially, refrigerated cooling creates a cycle of cooling. It takes the air inside your home and cools it, before pumping it back into your home.

Then, it takes that already-cooled air and processes it again and again, bringing the temperature in your home down with each cycle.

With evaporative cooling, you only really have one setting: “cool”.

While they perform well during summer, during winter, most evaporative ducted air conditioners in Melbourne spend the cooler months completely idle.

If you want heating, you’ll need a separate heating system. If your home has a pre-existing central heating system, this isn’t an issue – if you’re building from scratch however, that means even more money going into your project.

Here’s something you may not have known: did you know that most refrigerated ducted air conditioning systems (and even wall-mounted split-systems, for that matter) can now double as heaters?

It’s all thanks to reverse cycle technology.

If you’re worried about having to pay for a large, complex add-on to your ducted cooling system, don’t – ducted reverse cycle air conditioning essentially just takes the cooling process and reverses it to deliver heat.

Yep, it really is as simple as that! 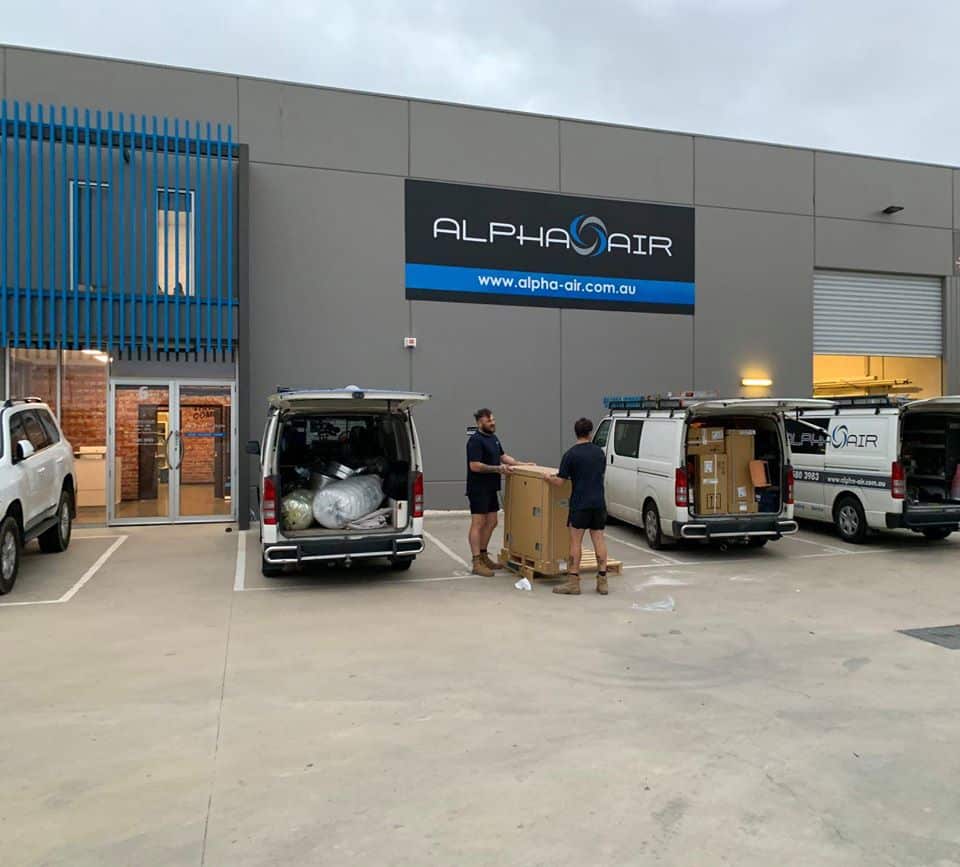 We’re making it sound like refrigerated cooling is the only way forward for ducted air conditioning installation in Melbourne. For most Melburnians, it is – on the balance, refrigerated systems are simply way more effective and flexible.

However, there are some instances where evaporative may still be the most appropriate choice.

It all depends on your needs.

At Alpha Air, our goal is simple: to give you the best balance of cooling power and cost. Each system we instal is tailored to fit your home… and most importantly for builders and renovators, your budget.

And once we choose that system, we’ll have it installed in a single day!

Find out which system best suits you – give Alpha Air’s experienced ducted air conditioning team today on 1300 854 525, or click here to get a FREE quote. You can also visit us for heating and cooling in Melbourne: pop into our office at F6 / 310-312 Governor Rd, Braeside VIC 3195.

Get a free quote